Welcome to Port Lincoln and the Eyre Peninsula, the Seafood Capital of Australia! Meet and greet at the Port Lincoln Airport by your personal guide before driving the short distance to Glen Forest Animal Farm. Take the opportunity to hand feed and interact with kangaroos and native birds, and see variety native animals, such as koalas, emu’s, dingoes, wombat, talking cockatoo and many more!

Take a 30-minute drive to the home of the best oysters and fishing in the world, Coffin Bay. Learn about the Pacific and the Native Angasi Oyster with an Oyster tour & tasting with local Coffin Bay oyster farmers Ben Catterall or Chris Hank. Depending on weather and tides as to which tour is available on the day. Ben will take you out in “waders” and pull fresh oysters out of the ocean, learn to shuck and eat them straight away! Chris from Pure Oysters Coffin Bay explains the whole Oyster growing and harvesting process. Fresh out of the rack, sample these Oysters and see the equipments used to get Oysters into the world top restaurants. Lunch of fresh seafood platters or at Oyster Bar.

After lunch, meander out to the Coffin Bay National Park to see some of the most spectacular coastal scenery in South Australia. Framed by the sea, the parks slender peninsula resembles the shape of a giant spur jutting out from the mainland. Don’t miss this superb photo opportunity, as the ever-changing loud formations make for a superb backdrop. Lastly, check in at the new 4.5 stars Port. Lincoln Hotel.

After a continental breakfast, check out of the Port Lincoln Hotel. Drive down to the industrial sector of Port Lincoln, the Flinders Ports Wharf. This wharf is South Australia’s main grain plant as the natural deep-water harbor enables Port Lincoln to fully load grain carriers, up to the massive Panamax class vessels. On average during a season, almost 3 million tonnes of cargo was moved through the wharf, totaling around $2.2 billion. This includes the majority of grain commodities (including wheat, canola, barley, peas and beans harvested on the Eyre Peninsula and a huge proportion of the fresh seafood caught in South Australian waters. Often you will have the opportunity to view the unloading of a fishing boat, or fertilizer that has been imported to grain that is to be exported.

Next, visit Marina Wharf, home of the largest fishing fleet in the Southern Hemisphere, to see the diversity of Port Lincoln’s fishing industries and vessels. The local fishing industries include Bluefin Tuna, Hiramasa Kingfish, Spencer Gulf King Prawns, Blue Mussel, Southern Rock Lobster, and Sardines as well as smaller trailer boats used for Abalone, Southern Calamari, Snapper, Crabs and King George Whiting. Following with a hands-on, 45-minute tour of the Fresh Fish Place, where you will see the full process a fish goes through, from ocean to plate. Meet local fisherman as they drop off the catch of the day from all over the Eyre Peninsula, to the factory that includes our famous King George Whiting, Flathead, Garfish, Leather Jacket, Boarfish, Snapper, Nannagai, Shark, Mussels, Coffin Bay Oysters, Prawns, Squid, Crabs and lots more. At the end of the tour, sample a tantalizing selection of in-house smoked fish and pickled seafood. Locally made souvenirs are available here for purchase.

Lunch at Fresh Fish Place. You can select your own fresh fish or shellfish from the pre-arranged menu and have this cooked to your taste. Enjoy seafood in the Capital Seafood Destination in Australia. After lunch, visit the diversity of the Port Lincoln National Park. From the naturally rugged and wild Sleaford Bay and the Southern Ocean to the tranquility of the Spalding Cove area and other beautiful beaches. Take a 45- minute hike to see spectacular views of Boston Bay, Port Lincoln and the Port Lincoln National Park at the Stamford Hill Lookout or even some 4WD adventure amongst massive sand dunes overlooking the beautiful Southern Ocean and clifftops. From here, we take you out to beautiful Mikkira Station, one of the few habitats where Koalas can be found in the wild. Sit back around the fire (only out of fire season) in the restored original homestead and go for a stroll under the beautiful old Eucalypt trees and come face to face with the cuddly icon of Australia as they laze in the Manna gums. As the sun settles for the evening, relax with a platter of local produce, wine and listen to the sounds of nature. It’s beautiful!

From Mikkira Station, we the take you back to the Port Lincoln Airport for your late departure.
Departures: Every Monday and Thursday except block out dates below:

Tours can operate on the above date however significant surcharges apply. 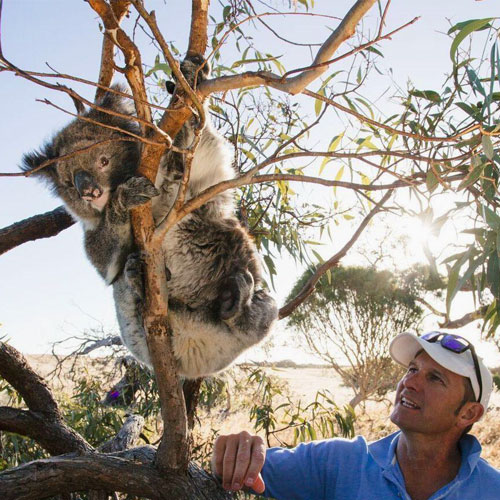