7D6N Highlights Of The South

*price above quoted based on twin sharing

Make your way to Cape Jervis for a 45 minute ferry to Kangaroo Island. The coastline of the island changes from the attractive curved beach at Emu Bay. On the west are two of the island’s natural wonders; Admirals Arch, and the Remarkable Rocks
2

Today you have time to explore the natural beauty of this island and discover Australian wildlife – in the wild! Highlights include Flinders Chase National Park, Kelly Hill Caves, the “Koala Walk” and the seals at Seal Bay.
3

Depart Kangaroo Island, taking the ferry from Penneshaw to Cape Jervis and drive to Victor Harbour. At Victor Harbour walk across the Causeway or take the horse drawn tram to explore Granite Island.
4

Travel up north making your way towards Murray Bridge, then around Lake Alexandria, skirting through Lake Albert. You will then travel along the coast, along Coorong National Park before you reach Robe. Robe was once a thriving ships port and prides itself on the preservation of the town’s history.
5

A choice of routes is available. The shorter route will take you via Millicent, and on to Mount Gambier and then along the coast to Portland and then onto Port Fairy. The longer route means a very early start, from Robe travel to Mt Gambier and then through the towns of Hamilton, Coleraine and Casterton and onto Dunkeld. From Dunkeld a scenic drive will take you through the Grampians National Park and onto Halls Gap. Departing from Dunkeld, travel via Penhurst to reach Port Fairy. Port Fairy is a quaint fishing village with many limestone and bluestone buildings in the town dating back to the 1840’s and classified by the National Trust.
6

This morning depart Port Fairy and travel towards Warrnambool. Continue along the “Shipwreck Coast” and you will come across “London Bridge” – the broken arch, before reaching Port Campbell, a quaint little seaside town. Travelling on past Port Campbell you will first come to Loch Ard Gorge and then a short distance on, the Twelve Apostles, which are huge stone rock formations carved over time by the waves of this rugged coastline. After Cape Otway re-join the coastline and the unmatched scenery which is the Great Ocean Road.
7

The scenic coastline from Apollo Bay to Lorne has been described as one of the most beautiful and breathtaking drives in the world. Near Lorne, visit the beautiful Erskine Falls, before following the coast road through Anglesea and Torquay, recognised as the surfing capital of Australia. From Torquay, travel north to Geelong, the largest provincial city in Victoria. Continue from Geelong along the freeway to cross the West Gate Bridge and arrive in the vibrant city of Melbourne. Your vehicle is booked until tomorrow and should be returned by the same time it was collected on Day 1 to avoid additional charges 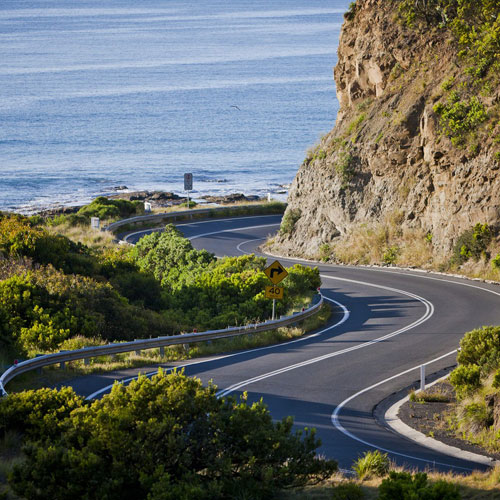