Meet and greet at the airport. Take a transfer to your hotel. Rest of the day is at leisure.
2

Breakfast at the hotel. Half-day sightseeing tour around Barcelona. The first part of the visit consists in a guided walking tour through the small and narrow streets of the Gothic Quarter, the oldest part of the city. During this early visit we will see Las Ramblas, de Cathedral Square, The Cathedral (free time to visit the Cathedral by yourself), the Old Jewish Quarter. Pass through the elegant Passeig de Gràcia Street, where there are located two of the most important Gaudi’s buildings (Casa Batlló and Casa Milà “la Pedrera”), the Triumph Arc, the Olympic Village and the Olympic Port. Visi the Montjuic Mountain. This is an important place because was the main scenery of the Olympic Games in the 1992. We will see the Olympic stadium from the bus and later we will have the opportunity to enjoy the panoramic views of the city riding the aerial tramway (subject to the weather conditions). For the next part we will go to the Spanish Village (Poble Espanyol) that consist in a synthesis of all the cultural variety in Spain. During the visit you will be given some free time to enjoy the different areas inspired in different Spanish regions, where you will find craft shops restaurants and bars. After that, visit Montjuic and come back to the city centre passing through España square, the twin Venetian towers, the MNAC and the Shopping centre Las Arenas, build in an old bullring. We will arrive to Catalunya square, and we will end up the tour.

Note: January to March (dates to be confirmed) the cable car doesn’t work due to revision tasks, this service will be replaced by a tapas tasting in Spanish Village.

Afternoon is at leisure to enjoy this wonderful city and surroundings.

Breakfast at the hotel. Depart to Madrid by high speed AVE train. Please refer to your documentation for detailed departure information.
4

Breakfast at the hotel. Depart to Seville via Cordoba Drive along La Mancha, Don Quixote’s land. Brief stop at typical site in Puerto Lapice. Cross through the natural border of “Despeñaperros” and get into Andalusia, a region for itself that shows an enormous heritage from a splendorous past. Reach Cordoba. Impressive tour of its Mosque and other sites that will ease our mind and spirit strolling through its narrow winding streets of the Jewish Quarter. In the afternoon, after a short two hours ride reach Seville. Dinner at the hotel.
5

Breakfast at the hotel. Morning panoramic city tour visiting: the exterior of the Cathedral (the second largest in the Catholic world after St. Peters in Rome), Santa Cruz quarter (a natural scenario of “Carmen” as well as a precisely where the myth of “Don Juan” developed), Maria Luisa Park and Plaza de España. Afternoon at leisure for you to discover exclusive views, specific flavors of this active full of light city. Dinner and accommodation at the hotel. Optional Flamenco tour.
6

After breakfast at the hotel drive east through the Caliphate road to the heart of ANDALUSIA observing an endless number of olive trees on the way to Granada and its incredible and amazing monumental environment, last stronghold of the Moorish Kingdoms up to 1492. Visit the world-famous Alhambra complex and Generalife Gardens that have inspired several authors with its sound and sights, such as the “Tales of the Alhambra” by W. Irving. Dinner and accommodation at the hotel. Optional Gipsy Flamenco show at Sacromonte quarter.
7

Breakfast at the hotel. Drive northward where it emerges, toward the sky of Castilla and surrounded by the Tagus River, the impressive Imperial city of Toledo –World Heritage City- where the three cultures Christians, Moorish and Jewish, have lived together. Resume of the Spanish art, history and spirituality the whole town is a National Monument. Short guided tour of this historical old town through its narrow streets. Then proceed with a visit to a famous “Damasquinado” (gold and silver inlaying in iron) factory. Continue to Madrid. Accommodation at the hotel.
8

After breakfast at the hotel transfer to the airport. END OF OUR SERVICE.

* Barcelona Local City Tax is not included, to be paid directly to the hotel. 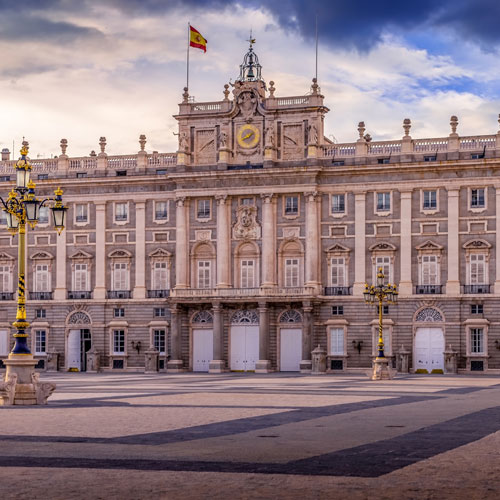